On 15th June 2017, 3 members (Barbara Colfer, Irene Lees and Linda Holden) of Fascinating Rhythm were delighted and honoured to be part of the BBC Music Day in Southmead Hospital.

This was to celebrate the 60th Anniversary of BBC Points West.

There were 60 choirs from all over the South West, members of the Bristol Youth Choir and the UWE ReVoice Choir, a community choir for people affected by aphasia.  We were also joined by YolanDa.

It was a very exciting day with the TV crew and recordings being made which showcased the theme of the power of music for good health and wellbeing.  This was broadcast on BBC Radio and TV.

The performance took place in the Brunel building of Southmead Hospital which was an awe-inspiring backdrop.  A great day was had by all. 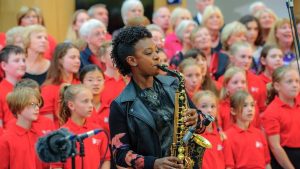