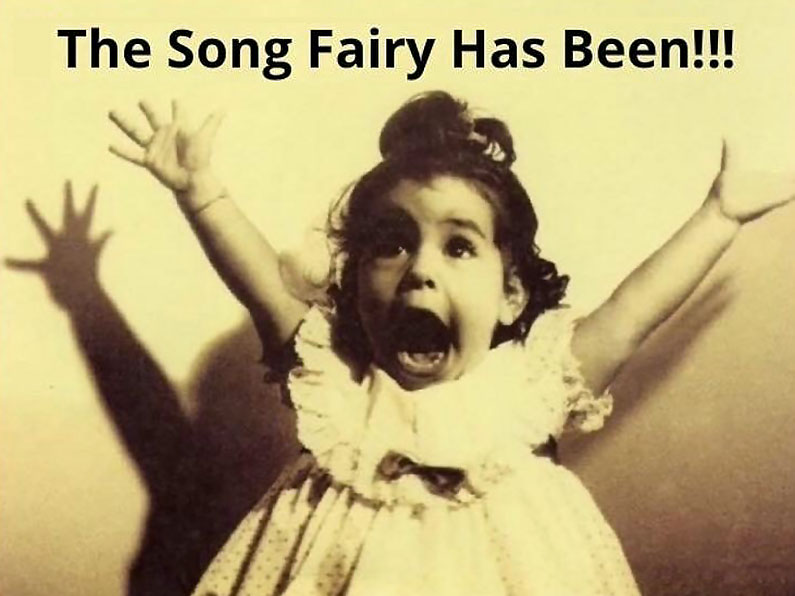 How we choose Convention songs

Fascinating Rhythm is an all-female choir, and we sing close harmony a cappella based on the traditional barbershop style. Our varied repertoire includes songs from 1920s jazz classics to modern-day show tunes and anthems and reflects our fun, dynamic chorus personality.

We pride ourselves on musical excellence and are always looking for ways to challenge ourselves as singers and push the boundaries of the modern barbershop genre. But not every song can be adapted to four-part harmony or performed without musical accompaniment.

So, we asked Fascinating Rhythm’s Musical Director Jo Thorn and our good friend, musicologist and arranger, Dr Liz Garnett, to reveal what makes a piece of music a good choice for barbershop competition and how songs make their way into the chorus repertoire.

Give Me A Barbershop Song

Traditional barbershop songs have no musical accompaniment and are made up of four vocal parts – the melody and three harmony parts. All four voice parts will sing the song’s lyrics together most of the time (in other words, the harmony parts don’t just go ‘oo’ or ‘dm-dm’ as a backing track behind the tune).

The melody usually sits with the Lead line. The Tenor part harmonises above the Lead, whilst the Bass is the lowest harmony part; the Baritone line sits in between and may move above and below the Lead throughout the song.

According to the Ladies Association of British Barbershop Singers (LABBS), barbershop harmony works best for songs that have a lot of harmonic seventh chords. These chords create a feeling of ‘tension’ in the music that you want to ‘resolve’ by moving onto another chord that sounds more comfortable. This transfer through musical tension and release gives barbershop its unique ‘feel’ and provides a sense of satisfaction for singers and audiences alike.

LABBS organises an annual Convention, bringing together quartets and choruses from across the country to share their love of singing, musicality and performance. The Convention competition follows Contest Rules (based on those devised by the Barbershop Harmony Society) and requires songs to be arranged suitably to the barbershop style.

Listen To The Music

“I like music from across the board. I love the old-fashioned traditional barbershop songs, but being able to hear more contemporary numbers on the Convention circuit makes my heart soar! I try to keep a mix of traditional and contemporary music in the chorus repertoire.”

Fascinating Rhythm mostly sings music that is arranged in the barbershop style (i.e. a cappella four-part close harmony), but we do have a couple of songs that include additional Soprano and Alto parts. “This Is Me” from the musical The Greatest Showman has sections that are sung in six voice parts, and “Mr Blue Sky” by the Electric Light Orchestra has been arranged in ten parts!

Fascinating Rhythm’s Music Team regularly reviews the chorus repertoire, deciding which songs to keep and which ones to retire. Songs that remain part of the repertoire, year after year, are those that resonate with audiences and get a good response from chorus members. The songs that tend to have a shorter lifespan are former Convention numbers that have been worked on so much that the chorus has fallen out of love with singing them or songs chosen quickly but didn’t resonate with the singers.

One of Fascinating Rhythm members’ favourite songs is “And So It Goes” by Billy Joel. It goes down well with audiences because the performance and message resonate with people.

“I love seeing the response from Fascinating Rhythm when they sing something that is relevant to them; songs like “Titanium” and “Shine” that have a strong message that we can really get behind and give meaning to as singers. And it’s great to watch how audiences react to anthemic songs like that.”

“Sometimes a song will grow with you as you develop as a chorus; other times you grow out of a song because you want to move on as a singer and performer.”

Go Your Own Way

A few years ago, Fascinating Rhythm’s Music Team decided to develop a new approach for choosing competition songs. Instead of looking at what other choruses and quartets had taken to the Convention stage, they wanted to work from a blank canvas and asked Liz to create some new bespoke arrangements for the chorus.

Liz is a talented arranger, vocal coach and musical director who has quite literally written the book on barbershop singing! She accepted the challenge of exploring the boundaries of the barbershop genre to bring new songs and exciting arrangements to the LABBS Convention stage.

Since 2015, Fascinating Rhythm has performed ten of Liz’s arrangements in competition, and we have another new song (no spoilers!) lined up for October 2022.

–   LABBS 2016: “Is You Is Or Is You Ain’t My Baby” by Louis Jordan and Billy Austin, and the Ella Fitgerald classic “Someone To Watch Over Me.”

Jo and Liz now have a tried-and-tested pattern for bringing new arrangements to the barbershop genre. Reflecting on their collaborative partnership.

“I’ve known Liz for a long time, and she is a safe pair of hands, musically. Liz understands the journey I’ve been on as a Musical Director, and it feels really personal to have her create bespoke arrangements for the chorus to sing.”

Making Your Mind Up

For Fascinating Rhythm’s Music Team, the process of choosing a contest song begins at least a year in advance of the Convention competition! The chorus will typically work on its competition songs for several months in the run-up to Convention, so they have to be sufficiently challenging and engaging pieces of music for the Musical Director and singers to be able to work on them in detail for an extended period of time.

Each member of the Music Team can suggest up to five songs that they would like the chorus to sing. There are no boundaries or parameters to constrain their choices (so they can take inspiration across all genres and artists), but they must find clips or videos of the songs to support their suggestions.

The Music Team then gets together for a ‘screening night’ to watch all the video clips and vote on how much they like the songs. A shortlist of half a dozen songs is drawn up using the combined voting scores, and these are sent over to Liz for her opinion on which ones would suit the barbershop style and make for an excellent contestable arrangement.

“By the time the shortlist gets to me, the songs on it have already been through a number of filters, so I don’t have to think about whether it will suit the chorus. There is usually one or two songs on the list that I think will be suitable for the Convention stage. But not all songs work in the barbershop style, and I won’t force a song where it doesn’t want to go musically, so I’ll feedback the reasons why I think each song on the list will or won’t work as a barbershop arrangement.”

Arranging a song to make it suitable for the contest stage means meeting specific stylistic criteria. Many classic 1930s songs will easily translate to the barbershop genre, but more recent songs can be trickier to adapt to a four-part a cappella style.

“Not all songs suit the traditional barbershop style. Sometimes, I need to apply a bit of creativity to make a song ‘barbershoppy’, but there’s no point trying to shoe-horn a song into a style that doesn’t work for it. It’s important to think about the audience experience – you want the song to feel ‘true’ for the listener; you don’t want the arrangement to distract them from enjoying the message and the music.”

Fascinating Rhythm is lucky to have a strong musical connection with Liz as a vocal coach and arranger. When arranging songs for the chorus to sing, Liz is able to hear Fascinating Rhythm’s unique sound inside her head and consider the preferred vocal range for each voice part.

And it’s not just Fascinating Rhythm who get to enjoy bringing Liz’s bespoke arrangements to life – they feed into the wider barbershop repertoire for other choruses and quartets to sing!

Thank You For The Music

Fascinating Rhythm’s unique sound comes from a combination of a good choice of song, use of vocal expression and focusing on delivering an authentic performance.

And, according to Liz (who wrote another book about it!), the relationship between chorus and director is key to making good music.

“It’s about your Musical Director’s ears. Fascinating Rhythm is lucky because Jo has the skill and intuition to encourage the chorus to make good music. Her directional gestures are made in response to the sound she wants to hear and the sound she is getting from the singers. A lot of Fascinating Rhythm’s sound comes from how Jo listens. The chorus sound would change if they had a different conductor.”

Dr Liz Garnett is a musicologist, choral clinician and close-harmony arranger with a long-standing interest in the barbershop genre. She is one of the UK’s most prominent arrangers of music in the barbershop style and has coached and arranged for many of the UK’s top choruses and quartets.

Liz has been a member of LABBS for over 25 years and is the Musical Director of the Telfordaires, a male barbershop chorus. She was a Music Category judge and held the position of LABBS Music Director for three years.

Liz has also adjudicated in barbershop and mainstream choral classes at Eisteddfods and music festivals.

If you enjoyed reading about our chorus and the kind of music we love to sing, you might also like to see other articles in the Fascinating Rhythm Insight series:

06 – The new members’ guide to joining a choir during a pandemic!

09 – Singing is a family affair 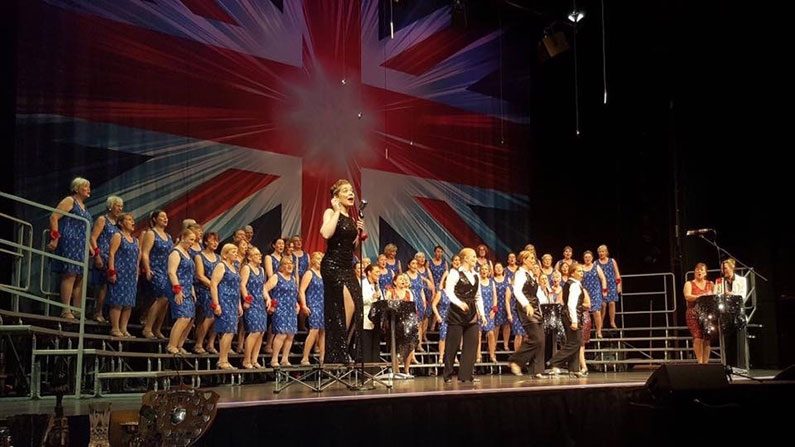 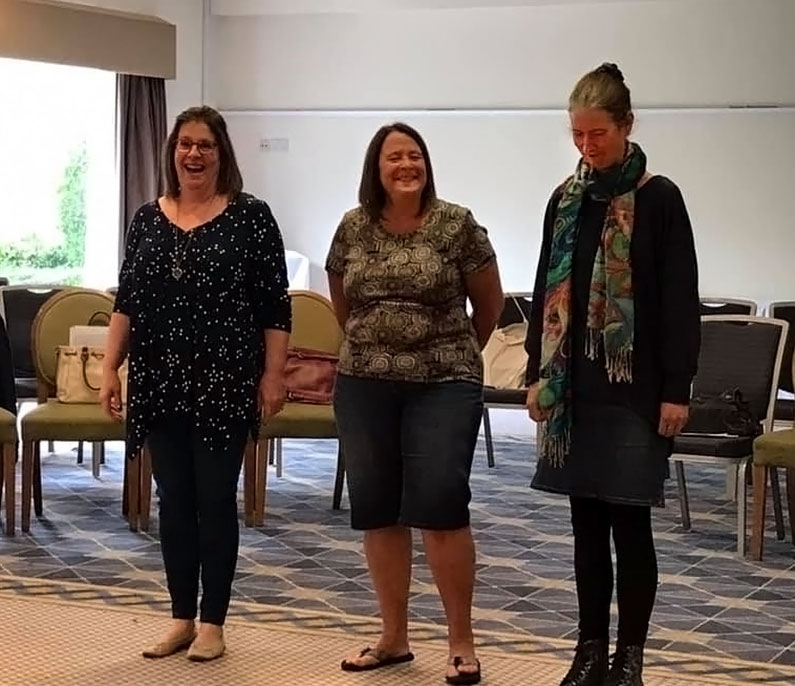 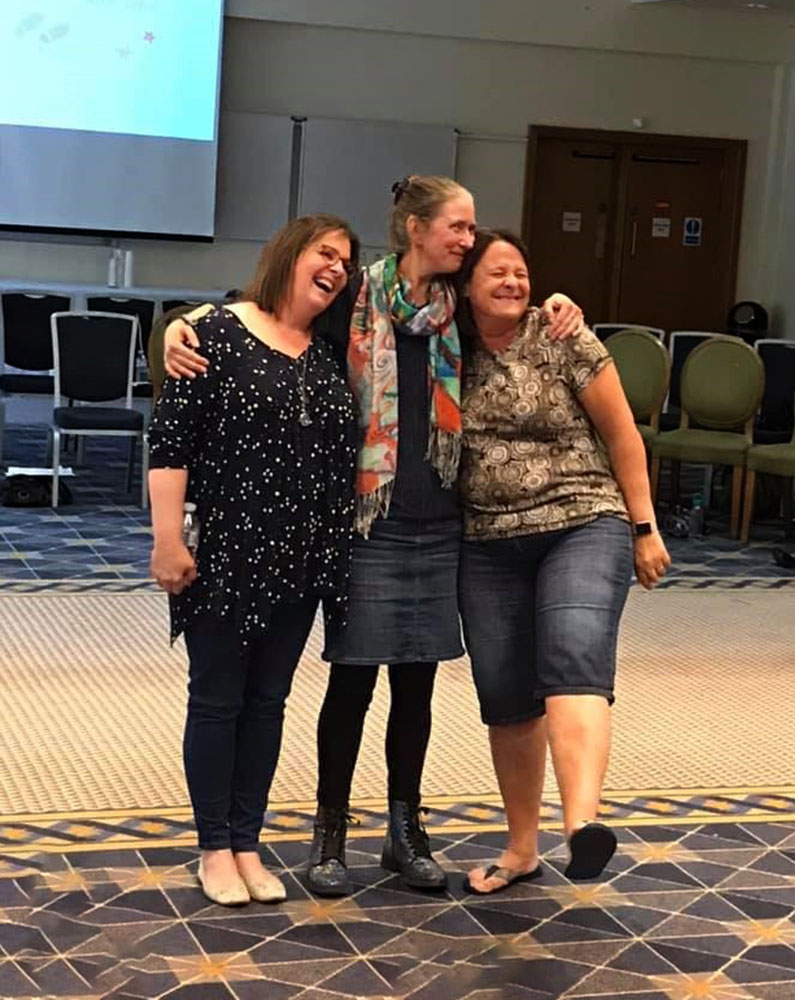