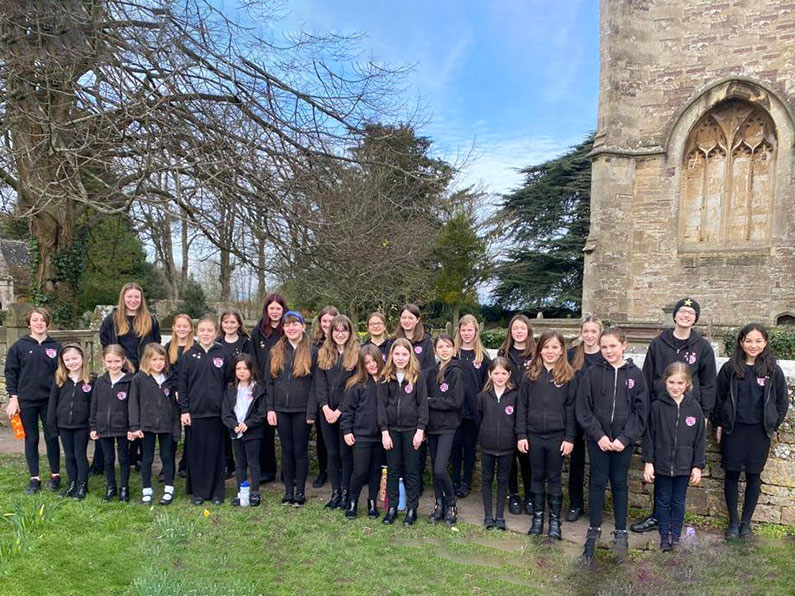 Junior Fascinating Rhythm (Junior FR) members are celebrating singing success at the recent Thornbury Eisteddfod, part of the Thornbury Arts Festival 2022. The girls picked up several trophies and were invited to sing again in the Presentation Concert at which they were awarded a bursary.

Junior FR’s senior girls (aged 11-16 years) competed in the ‘Choirs 18 and Under’ category. They received a Distinction for their beautiful performance of ‘Lullabye’ by Billy Joel and the Electric Light Orchestra’s ‘Mr Blue Sky’. The adjudicator was impressed by the musical phrasing of the two songs, which was something the girls had worked hard on in preparation for the competition and complimented them on a ‘touching performance’. In recognition of their musicality, the girls were presented with two trophies: Best Performing Choir in their class and Best Choir Overall In Competition.

Junior FR’s junior girls (aged 7-10 years) competed in the ‘Choirs 11 and Under’ category. They were Commended for their performance of ‘Hakuna Matata’ from Disney’s The Lion King and ‘Janie Mama’, a Jamaican children’s song. The adjudicator awarded the girls a trophy for being the Best Performing Choir in their class.

Junior FR’s Musical Director, Wendy, said “We always look forward to the Thornbury Eisteddfod – it’s a big event in our calendar. At Junior FR we really enjoy the whole process of getting our songs ready for competition and we are always well-received by the adjudicators and organisers. I’m delighted that the senior girls have been recognised for their outstanding performance.”

Evie and Caitlin sang in two classes: Under-14s Show Songs and Under-14s Traditional Songs. They performed exceptionally well, with Evie securing first place and Caitlin second place in both categories. Evie was awarded a trophy for achieving the highest score across the board in traditional song.

Lily won the Under-12s Show Song class, and her duet with Amelie in the Under-12s Duet class was considered ‘outstanding’ and won the whole category with a score of 90 points. In recognition of the high quality of their singing, Lily and Amelie were also invited to perform again in the Winners’ Concert on 25 March 2022.

Anna and Izzy sang together in the Under-14s Duet class. They gave a mature and professional performance and scored 83 points.

Junior FR was invited to sing at the Eisteddfod Winners Concert on 25 March 2022, where they were presented with the Robert Hall Bursary of £100 in recognition of their outstanding performance. This is the second time that Junior FR has received the bursary, which is awarded at the discretion of the Eisteddfod Committee.

Wendy said “I’m over the moon that Junior FR has once again received the Robert Hall Bursary! It’s lovely to get the recognition and the money will be spent on something that will really enhance Junior FR’s singing and performance. Last time, we bought portable speakers that we could use in rehearsals; this time it would be lovely to spend it on a specially-arranged piece of music.”

Duettists Lily and Amelie also sang at the concert and were presented with the Jonathan Parfitt Cup, which is awarded for an outstanding performance. The award is made at the discretion of the Eisteddfod Committee with advice from the adjudicator. Lily and Amelie were one of only two performances that achieved an outstanding mark of 90, making them deserving winners of the cup.

Kate Phillipson-Masters, Chair of the Eisteddfod Committee, said “It was so good to have the Junior FR girls perform at the concert. They really are a most impressive group.”

Keeping it in the family

One of Junior FR’s newest and youngest members, Eva, was delighted to sing in the Eisteddfod for her first choir performance.

Eva said “It is fun and I like singing a lot. I like learning new songs like ‘Amazing Grace’. This was my first ever competition. I felt scared at first but when I started singing, I felt comfortable. I like that my family can sing too.”

Eva has a long-standing connection to Fascinating Rhythm because her great-grandma Thelma sang Bass with the chorus for many years and her great-aunt Lesley currently sings in the Lead section.

When Thelma retired from singing a few years ago, she become an honorary member of Fascinating Rhythm. She went along to the Eisteddfod to support Eva and the rest of the Junior FR girls. Afterwards, Thelma said “I felt so proud to watch Junior FR in the Eisteddfod competition. I have supported them since their formation but to have my great-granddaughter singing with them was so very moving. She is following in my footsteps and her aunt Lesley’s. I am so proud of Eva and have noticed already, despite being a new JFR member, her confidence in everything; her enthusiasm, calmness and dedication to learning her music without input from others. She is showing how much she enjoys singing, something she has always loved since she was little. It is with huge pride that I see my lovely girl so happy and contented. I hope Eva will enjoy having music in her life as I did and that she will be a good asset to the Junior FR chorus.”

Reflecting on the girls’ performances and successes in the competition, Thelma said “I enjoyed both the junior and senior girls’ sections. They were so very well performed and deserving of their high marks. I especially loved ‘Mr Blue Sky’ which the older girls sang; it was a difficult arrangement – well-done girls!”

Junior FR is currently recruiting new members so if you, or someone you know, is interested in taking up singing or joining, please contact us via our website.

Junior FR is a choir for girls aged 7 to 16 years old. There is no audition process for new members and no previous singing or musical experience is needed. Members meet weekly during term-time at Iron Acton Village Hall (Friday afternoons, 4.00-5.30 pm), perform at events throughout the year and help to raise money for various charities. 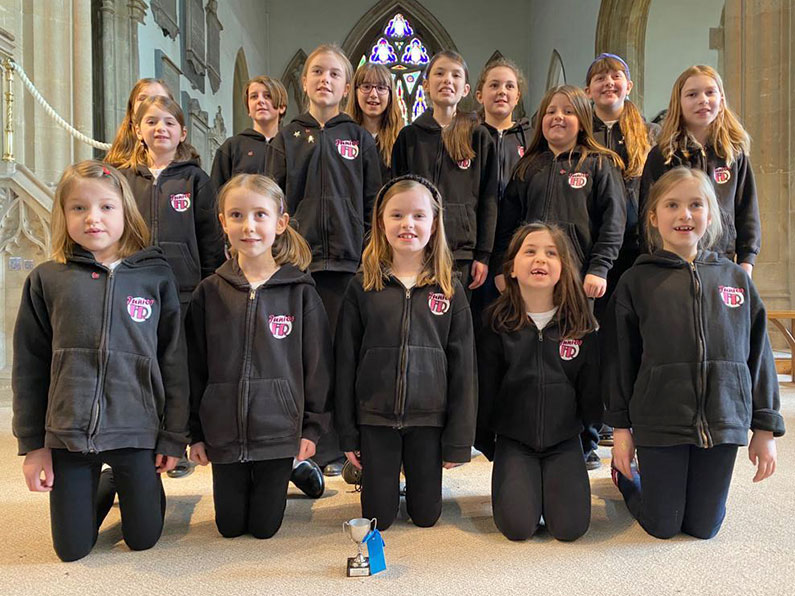 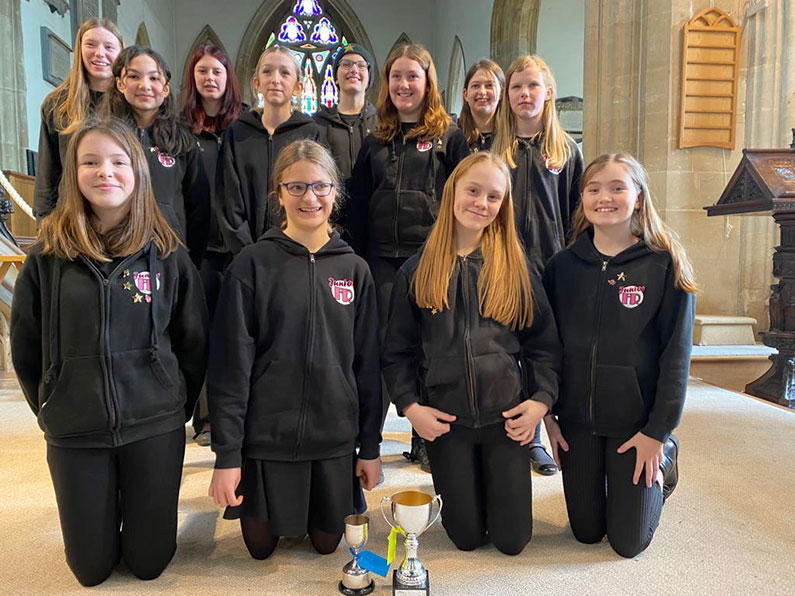 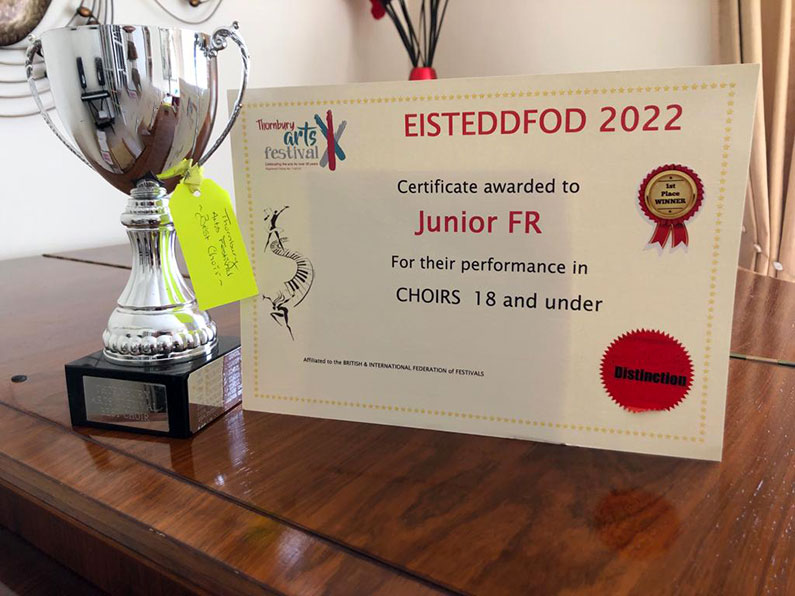 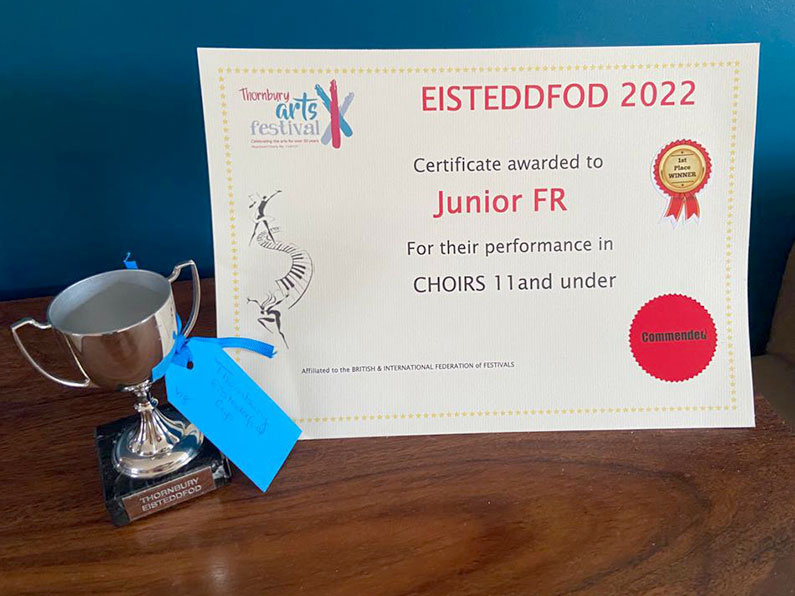